I bought this hand-lettered cookbook last week at a rummage sale. It was compiled by the women’s auxiliary of the Church of the Ascension of Inuvik, Northwest Territories in 1963. Inuvik is a small community 200 kilometres north of the Arctic Circle.

In many ways it’s a typical church cookbook of the time, with recipes for jellied salads, Nanaimo bars, tuna casseroles, and no less than four recipes for sweet and sour spareribs. But there are also recipes you wouldn’t find anywhere else.

After taken Muktuk from whale, leave 2 days hanging up to dry. Cut into pieces 6″ x 6″. Have water ready to boil, then cook until easy to put the fork through. Keep in oil in a 45 gal. or milk drum in the cool place in order to have Muktuk all the year for eating.

Take fish eggs out and freeze them. They are good to eat like this.

Clean the rats well and rinse. Put in a roaster and put bread stuffing on top of it. Roast in an oven until the muskrats are soft.

Clean a whole duck and put a stick through it. Put to roast quite far from the fire, so it will not burn. Roast slowly and keep turning. This is good to eat when tired of roasted rats, when hunting rats in the spring.

Rabbit should be cleaned as soon as gotten. The insides should be cleaned out immediately, then place rabbit before a campfire and roast until done. This is delicious when eaten hot. Do not cook too much because when cooked too much it doesn’t taste as good as when it’s cooked just right. This goes for duck and fish, also muskrat.

Sift together 6 cups flour, 6 tsp. baking powder, and a dash of salt. Add 3 1/2 cup water and 1/2 cup caribou, reindeer or beef fat melted. Mix until smooth, and then knead with hands. Cook in greased frying pan on stove or bake on fire.

Take piece of meat required for one meal. Soak overnight in salted water. Rinse well and cook to your preference as you would cook baby beef.

Cut fish up before it is thawed, place in a bowl that has vinegar and Soya Sauce mixed. Let fish soak to your taste and it is ready to eat.

Cook fresh louch liver in frying pan on the stove and as cooking remove grease as collected on surface. This must be done so the pudding will not be too greasy and rich. The liver must be well done. After well cooked and as much grease as possible removed. Add cranberries to the liver and mash with a fork. Add sugar to taste and cook until berries are done. This is delicious hot or chilled.

Mash up roasted or boiled fish, white fish preferred, and remove all bones. Add blueberries to fish and mash some more. This is good to eat as main meal or desert.

To Make Grease Out Of Caribou Bone

Put a stone on a large piece of canvas. With a small axe pound the bone on the stone into small pieces. Put the pieces of bone into a large pot of water and boil. Boil for about 1 1/2 hours and the grease will come to the top. Take the grease out and put into another container.

When roasting a caribou head use a hooked stick. Hang the head near a stove and roast. Turn with a stick to roast on the other side. Put a frying pan under the head for the grease to drip into. After a while, pour some of the grease over the head so that it will not dry. Roast for about 2 1/2 hours.

I love finding cookbooks from Canada’s north (and Newfoundland too) for unique recipes like these. 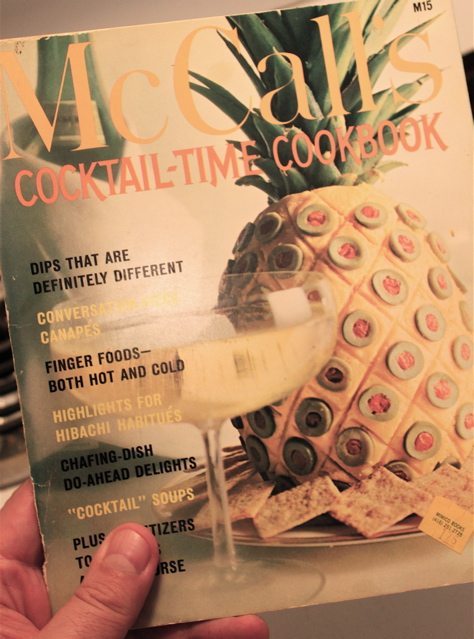 3. Turn mixture onto wooden board. With hands, knead until smooth and pliable.

4. Refrigerate cheese mixture until chilled and able to be molded – about 45 minutes.

5. With hands, roll mixture into a cylinder. Place cylinder flat on cookie sheet; underside will be back of “pineapple.”

10. To serve: With broad spatula, carefully remove cheese-pineapple from cookie sheet to serving platter, standing it upright on broadest end. (Flat side becomes the back of the pineapple.)

11. Place pineapple frond on top. Surround with small crackers, for spreading. Let stand at room temperature about 30 minutes before serving.

I don’t understand the dimensions in step 6 – they seem a little bizarre. Just mold your cheese into something that looks like half a pineapple, approximately life size. I didn’t bother to stand it up – I thought it looked better laid out on a platter (also easier to dig into).

If I was going to make this again, I’d add more stuff to it to make it more interesting – like chopped onion. I’d also use less mustard.

It makes a lot of cheese ball, so if you’re not serving a big crowd you’re going to have a lot left over. 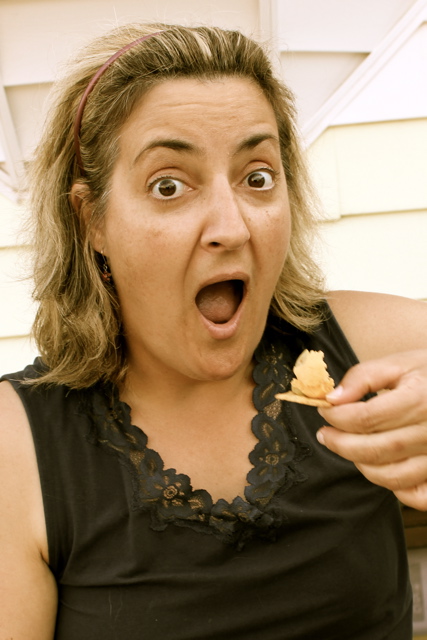 Went to Calgary last weekend to see my buddy Gary.

As per usual, we did a lot of thrifting and ate a lot of good food.

Also did a lot of walking with this fella.

On Friday night we went to a huge book sale at a curling rink.

Undoubtedly the biggest book sale I’ve ever been to. Softcovers for $1, hardcovers $2 and up. I guess the books were donated by CBC listeners/viewers. Lots of bestsellers but also some rarer stuff, including a first edition Hemmingway (The Old Man and the Sea, I think) that they were asking big bucks for. I feel for the poor sap who unknowingly gave it away.

There were rivers of books. I didn’t buy anything, but Gary picked up some sci-fi paperbacks and a few other things.

Saturday morning on our way to brunch we hit a garage sale I noticed the day before that looked like it might be interesting.

It seemed to be stuff from a gift or home decor store – a lot of those touristy wood carvings from Thailand or Indonesia or wherever (elephant marionettes, frogs with umbrellas type of thing) but there was also some cool vintage stuff at pretty good prices. 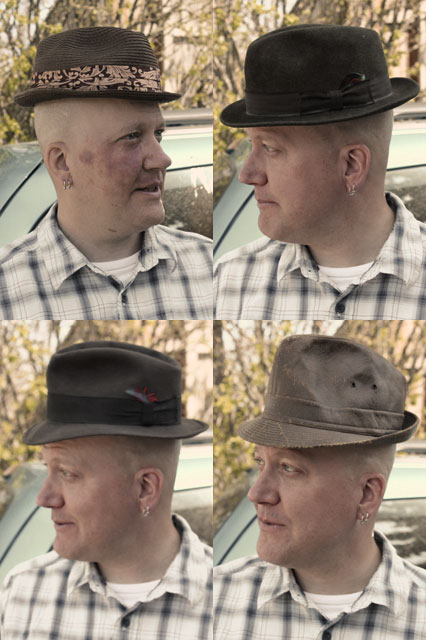 Gary really wanted to buy one (or even all) of these fedoras, if only they fit.

He bought this vase, marked “Jasba” for his uncle, whose collection of West German ceramics is taking over his whole house.

He also bought this unpainted Russian nesting doll. I know he’ll do something cool with it (he mentioned robots as a possibility).

Brunch was at a diner called Dairy Lane in the residential West Hillhurst neighbourhood. I had this protein overdose called the Triple Double which consists of 3(!) poached eggs, Hutterite bacon, two kinds of sausage and slabs of multigrain toast. Everything local (except the orange, of course).

Gary had the granola-crusted French toast

and got annoyed with my paparazzi ways.

At another garage sale, I picked this rotary dial phone out of the free box. I don’t know why, but I’ve been wanting one lately.  I hooked it up (at home, not in my car), and to my surprise, it works just fine – but it takes forever to dial a 10-digit number.

[Silly me, forgot to take pictures at Inner Sleeve]

At The Inner Sleeve, a record store near Gary’s house, they had 3,000 records from CBC Calgary. CBC has been divesting itself of its music libraries across the country – shortsighted and sad. In Edmonton, they donated the records to Goodwill (see my previous posts) but in Calgary they sold them to record dealers. There was some very nice vinyl that I was interested in, but not at record store prices ($15 to $40 per).

I was most intrigued by this album, by 60s Canadian pop group The Sugar Shoppe (I stole this image from the internets. Sorry). The dandy in the green suit second from the left is Victor Garber, star of Broadway (Sweeney Todd…), movies (Godspell, Exotica, Titanic…), and television (Alias…). This was The Sugar Shoppe’s only album. As you can tell from the clip below, they were more than a little influenced by The Mamas & The Papas.

Their version of Canada’s 1967 Centennial song (“Ca-Na-Da”) delights me a lot – so different from the official version.

For supper we met a couple of Gary’s friends at trendy Char|cut roast house – described as “urban rustic cuisine”. I’ve been wanting to go here for a while, though I thought it might be the kind of place where you can drop a lot of bucks and still leave hungry. No worries though – it lived up to its considerable buzz.

This was the star of the evening for me – tender pork belly on a bed of cheesy hominy grits with nettles and tiny fiddleheads. Oh my yes.

Not a fan of most poutine, but this one was outstanding (the secret ingredient is duck fat). 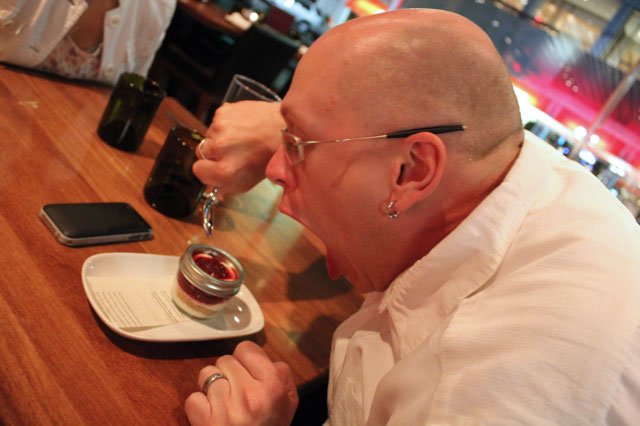 Edwin devours his cheesecake in a jar.

The only disappointment for me was the dessert. The pineapple upside down cake was too dense and bland. The best part was the scoop of coconut gelato. Gary’s milk chocolate mousse was a much better choice (did not  taste Edwin’s cheesecake). 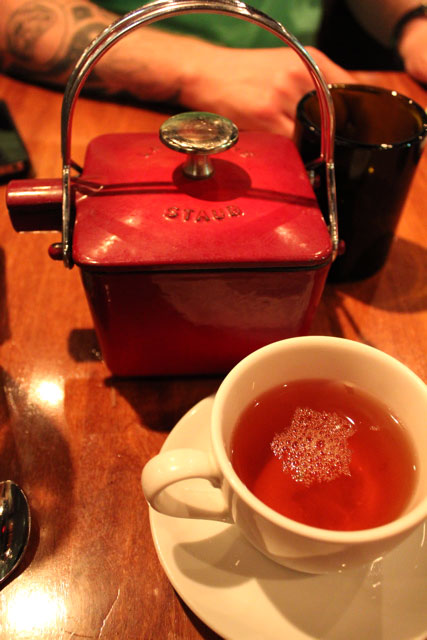 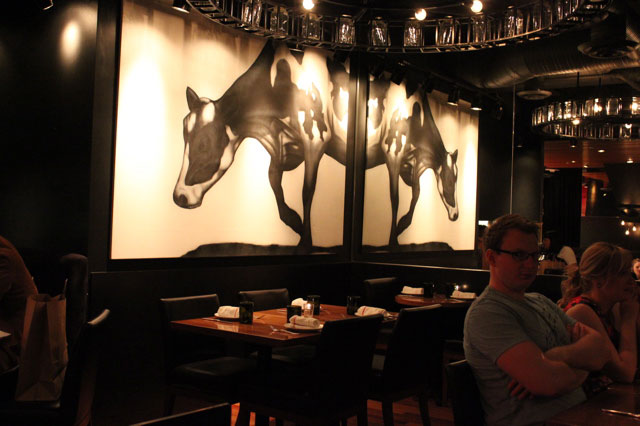 Somewhere between Gary’s and the dog park is this house with an amazing ski fence (in the Altadore neighbourhood, if you’re looking). 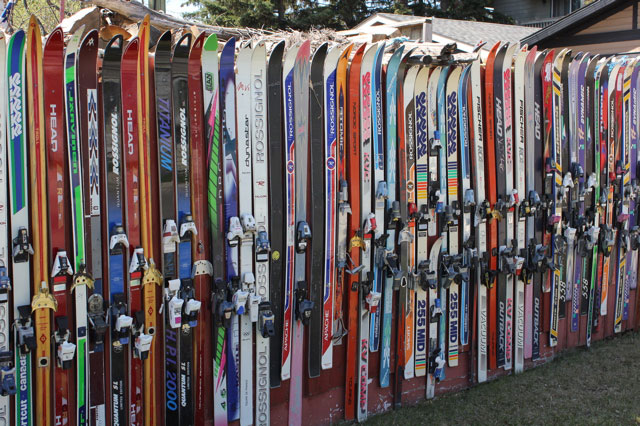 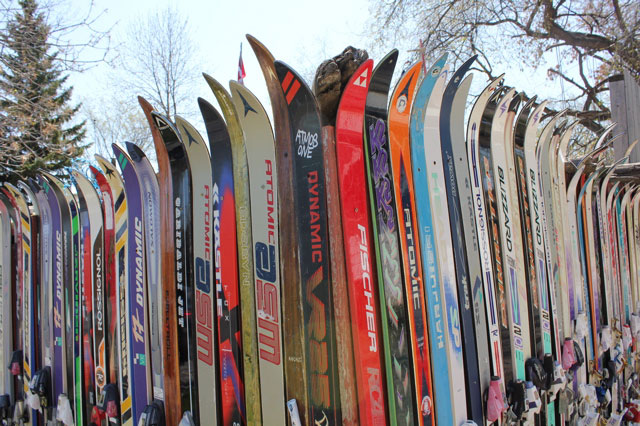 On Sunday we went to the Rogers video store where they’re clearing out DVDs – buy 1 get two free. It was down to the dregs, but even so there was some worthwhile stuff. This is my stack:

I’ve seen most of these but I’m looking forward to watching Funkytown for the first time (about the disco years in Montreal) and the 40th anniversary edition of Face Off (the 1971 Hockeysploitation movie – not the John Travolta film), which includes the SCTV parody as a bonus. 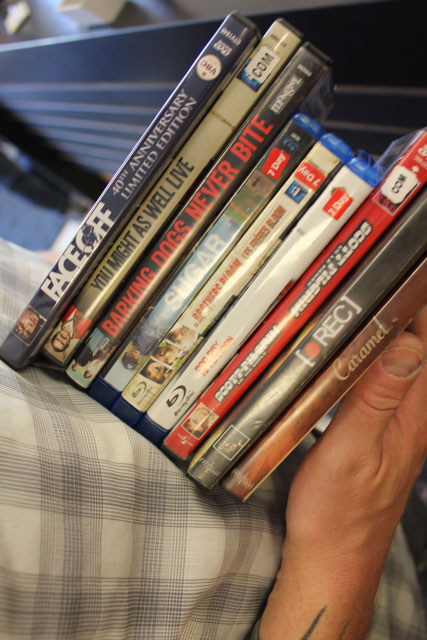 Gary’s pile (note that he also picked up Face Off).

On Monday I picked up Mr. Bali Hai at a for-profit thrift store. My best tiki mug score in many months.

Yes, he’s ugly and probably culturally insensitive, but I love him.

Before leaving town on Monday, I went for lunch with Gary and his uncle to a Jewish deli in the warehouse district called Gruman’s. 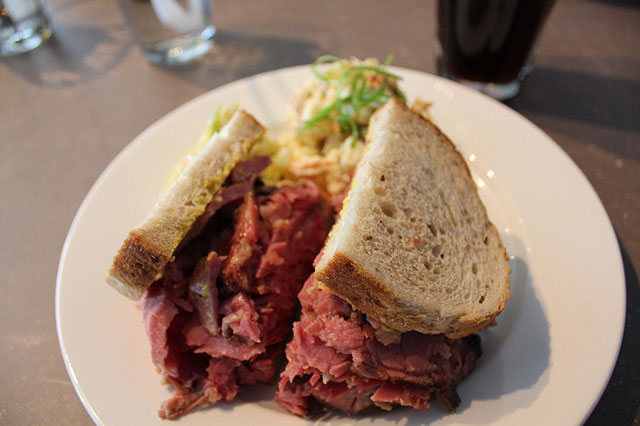 And that’s my story.