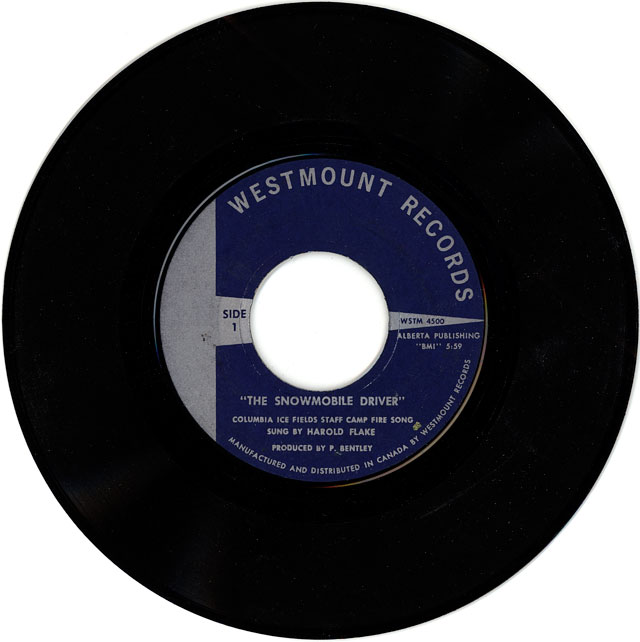 In May 2005 I found this delightful oddity in a stack of 45 rpm records at Goodwill – a singing snowmobile driver from the Columbia Ice Fields high in the Rocky Mountains of Alberta, poking gentle fun at at the tourists:

All I can suggest in response is……

“I am the driver of a snowmobile,
I’m a helleon behind the wheel,
telling stories wherever I go
across the bed of ice and snow.

I started work on the first day of June.
Other kids started arriving soon,
looking forward to a good summertime
with new kids to meet and mountains to climb.

Now for my question…. “What do you think?”

I look forward to hearing from you soon.

I have more questions:
Did you write the song?
When was it recorded?
Did you drive one of the old-style snowmobiles with the small round windows, or one of the bus-type ones? 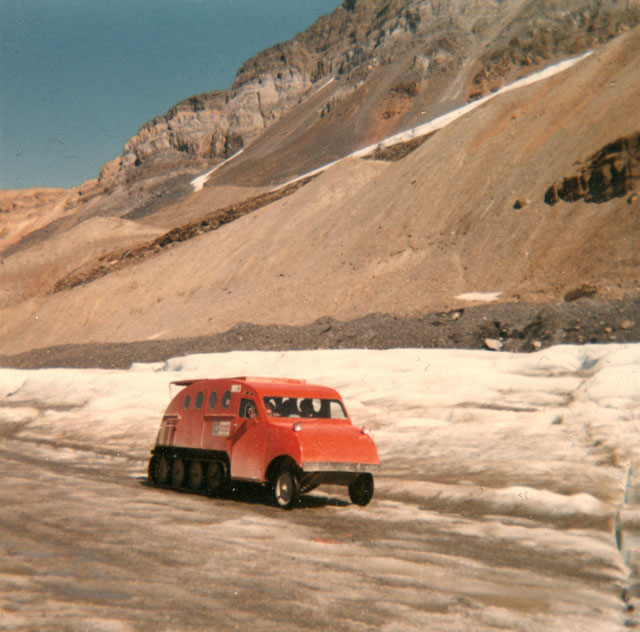 This is all very interesting, but I must admit that this is not my best effort.Yes, I was a snowmobile driver for Snowmobile Tours Ltd./Brewster Traansport Ltd. from 1969 -1972. I drove the old style snowmobiles in 1969, complete with incidents of losing wheels and tracks and getting high-centered in the spring snow cover (rescues sometimes took an additional hour so our tour was more exciting and I needed to tell lots of stories).In the evenings, I would often play my guitar at a staff campfire. One rainy night I had an inspiration and sat in my room and wrote this song. It became the Columbia Icefields campfire theme song (requested 2-3 times in an evening). Many of my staff friends wanted me to record it on a tape recorder for them but while attending university at Calgary I had learned that it was possible to make individual records. Considering the requests, I researched a recording studio in Calgary with the intention of making a dozen copies. Initial costs were large and the per-record cost dropped drastically with mass production and I also needed something for the other side of the record so I decided to make it a souvenir and put the tour on the flip side. I entered into an agreement with Westmount to produce 1000 records. What you have is one of the original recording session. This was a real disappointment for me.I hired a professional guitarist (six string) who said he also played bass but didn’t own one. I borrowed one from a friend in Red Deer, got caught in a freak ice/snowstorm and rolled my car the night before the recording session. The guitarist wasn’t that great on bass and couldn’t seem to catch the correct rhythm but studio time was expensive and finally I just went with what he could reasonably do. I then had to do the tour for the other side. I ran out of recording time but the producer assurred me he would select several instrumental exerpts that were not copywrite and put music behind the tour words (I had intended to select what I wanted). I was very excited when the records arrived but devastated when I actually heard the end result. The shipment nearly sold out that year and I tried to order an additional 1000 but the studio were not faithful to their quote for reorders and wanted to charge more than double my original cost to simply reprint the record. I decided it wasn’t worth it because I didn’t like either side of this record.

The following year at university, I became a member of the “Radio Socieity” an on campus radio station. I did a regular one hour program at 6:00 pm so I learned to operate the studio and how to access non-copyright music. With the help of two friends, I started over and made my own tape on the necessary 15 ips tape and sent it to RCA Victor in Toronto to have a new record pressed. 1180 copies of this second recording are out there somewhere (I know for sure some are in Egypt, Israel, Germany, Scotland, Brazil and France as well as throughout the U.S.A. and Canada. It has the correct rhythm, some life, and a varieity of background music to set mood to various parts of the tour. I also had a new label made that was more of an ice blue (the typical color of the mountain lakes) and I made my own jackets with a hand drawn picture of a snowmobile. About 20 copies are somewhere in a box in my basement. An aside: One afternoon during my university days, I heard my song on a CKXL request program. It was the follow-up to a comment previously made by the DJ “I wish somebody would write a song about a snowmobile.”

The original was done in 1969, The second version in 1970. By this time the S300 machine went into operation for tours. I was the original driver of this 28 passenger unit. At the end of that season I was approached by my boss and asked what changes or additions I would recomment for a future design. The following year I was the main driver of the S301 (a 52 passenger unit).

My questions:
1. Where do you live?
2. Your initial contact came through my website, how did you connect with it?

Edmonton.
Googled your name.
Another question for you: What’s a “gorby”? (if that’s the word)

A gorby is actually quite different than the person who has just been googled. There are different versions of the creature. I’ll give a couple of examples so you can better understand the definition.

1. Once when asked about the “gorbies” while on tour, I described them thus. “They are about the same size as a human but a little larger. They come in many different colors and have very large eyes. They also have a hump on their back and two antennaes sticking above their heads, which we assume assists in their communication.” I was not believed but toward the end of the tour we actually saw four of these creatures walking along the tour road on their way to the “Saddle” (a snow patch between Mount Snowdome and Little Snowdome where one can ski in the middle of the summer).

2. It was a gorbie that challenged my scientific explaination of millwells (the deep holes in the glacier with water running into them) . The gorbie “knew” that we worked closely with Walt Disney and actually built this ride. I then had to confess that when the other drivers and I were there earlier in the year, on the mountain tops, shovelling the snow into the valley and then driving on it to pack it into ice, we discovered a problem. The Snow started to melt! so we put in a huge pipeline to act as a sewer system. The gorbie now understood saying “I knew you guys were making up a story about this 400 years old ice. Don’t worry, I won’t tell your secret.”

3. A gorbie was very upset when a sign fell on the hood of his car because the snow that supported it melted too much on a hot summer afternoon. The sign said “No Parking”.

4. I had one on a tour once. He kept interrupting because there was an announcement he heard just before boarding the snowmobile (one of the small ones) There was a call for the owner of a Buick to come to the ticket office, his car had been left in neutral and had rolled out of its parking space and went over the side of the mountain. This gorby laughed and laughed and kept interrupting my tour to tell me to “forget the gab, I want to see that car that went over the mountain!” He was very rude and when we returned the the ticket office he bolted out of the door before I could finish my tour speil and let them out. Moments later his voice could be heard, loud and clear, “That’s not a Buick! That’s a Cadillac! That’s my car!”. One of the other guests from that tour said “It couldn’t have happened to a nicer guy!”

5. Gorbies are interested in FACTS like “How much does that mountain weigh?” and “How many trees do you have in the National Park?” and “Do you use regular swimming pool paint to paint the bottoms of the lakes every spring?’

PERHAPS I SHOULD HAVE YOU GIVE ME YOUR DEFINITION OF A GORBIE NOW. For snowmobile drivers, it is a real word, however I doubt if you can google it.

With a whopping 1,000 copies pressed, this record seems to be in a different category altogether from the usual one-off cassettes and recording blanks I present in this category, but it embodies the same do-it-yourself ethos of those other amateur recordings. I’d really love to hear Harold’s later version, though I doubt it could match the charm of this one, no matter how much more satisfying he finds it.

A week ago Saturday I grabbed my old point-and-shoot camera (my new SLR having been lost/stolen) and headed to the newly opened Goodwill store in Old Strathcona. While I’m still choked about the loss of my SLR, the old point-n-shoot is more discreet for stealth jobs like thrift store shoots. 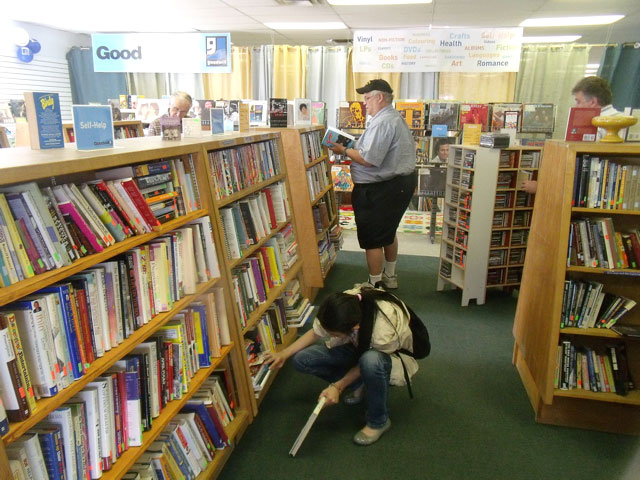 The new Goodwill, at Gateway Blvd. and 78th Ave., is called “GoodBooks” – it has no clothes or housewares , just books, records, cds, dvds and such. 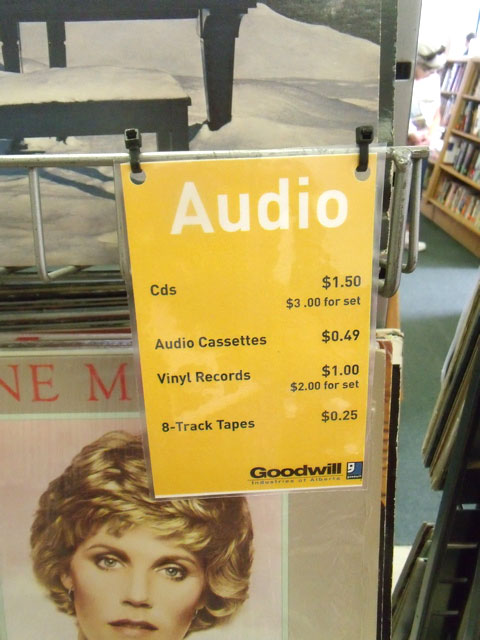 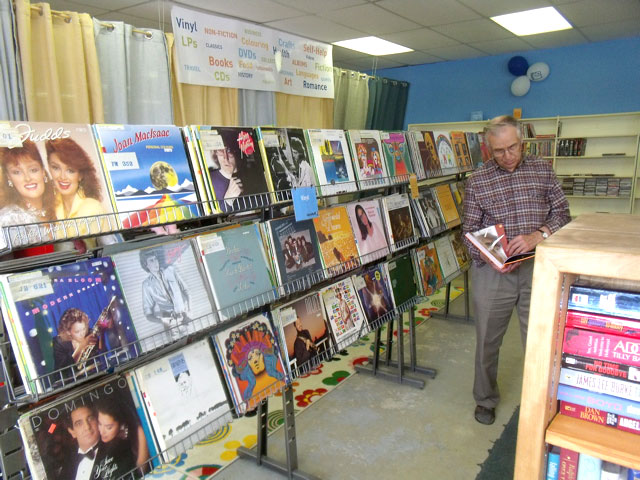 The records are well displayed. At this point, they’re mostly from the massive CBC record library donation I’ve written about in the past.

I bought one record – not from the CBC library:

which unfortunately I already owned (though with a different cover). 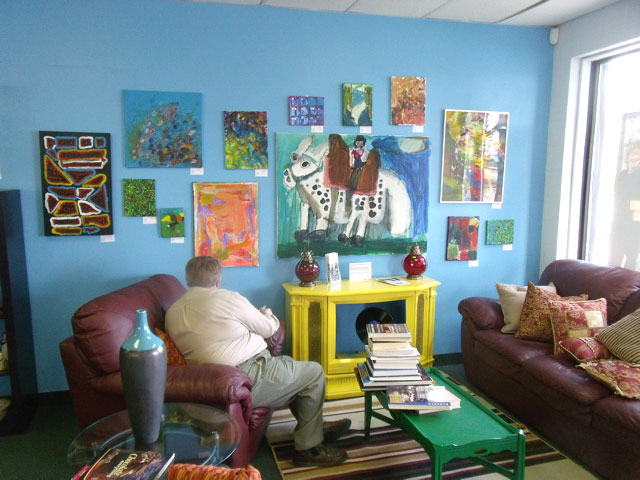 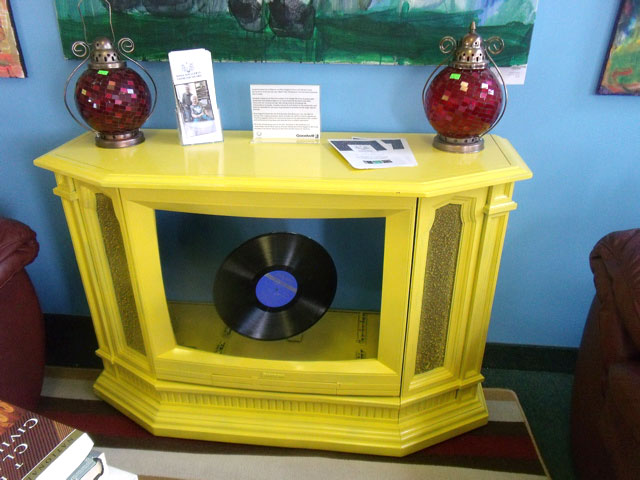 Here’s a new use for old tv cabinets. 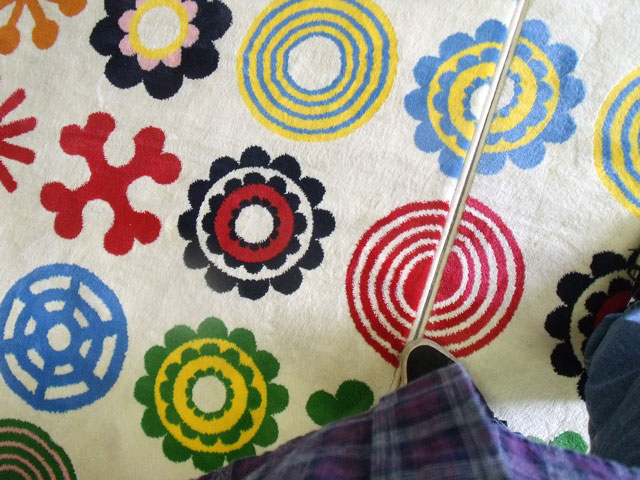 Oops, took this photo by mistake.

Always good to see a new thrift store open up, especially in the ‘hood.